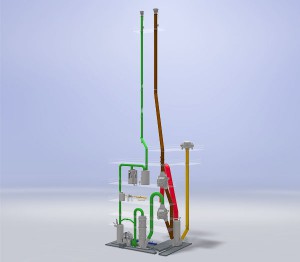 From the overflow valve the clean process gas is routed to the clean gas stack A17 via the demister F17, where residual water droplets are precipitated from the gas stream. At the stack head the process gas is ignited and continuously combusted whilst being released to atmosphere.

During start-up and shutdown of the furnace as well as during emergency situations the furnace off-gas is emitted via the emergency stack A12. Again, the CO-rich gas is ignited and combusted at the stack head.

Functionality of the Ignition System

The ignition systems X17/X12 are designed as the so-called “climbing flame”. The ignition gas, usually natural gas, is ignited in the ignition control box with two high-voltage electrodes. Ignition gas as well as combustion air is added at several points in the flame pipe rising up to the stack head, allowing the ignition flame in the pipe to rise from bottom to top and finally igniting the process gas escaping at the stack head. Ignition as well as the presence of the flame is monitored by the flame monitoring system using thermocouples or infra-red sensors.

back to overview Key Components
© 2022 THEISEN GmbH, Munich
Back To Top